The program will feature Tye’s original compositions and arrangements from his forthcoming album, Between Strings (out July, 2018), for solo guitar and string quartet. 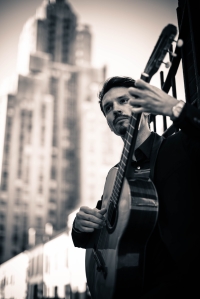 Tye Austin is an international award-winning classical guitarist and composer based in New York City. Within a decade of picking up the instrument, he has performed solo at Carnegie Hall, London’s Royal Albert Hall, the United Nations, US French Embassy, and he’s been interviewed by NBC News, Psychology Today, and live on NPR. Tye plays a wide range of music from classical to flamenco, jazz, and contemporary pop. He received his Master of Music degree from the New England Conservatory in Boston, MA, and he studied flamenco guitar in Granada, Spain. Tye’s debut studio album, Andalusia: Spanish Guitar Music, was released on December 15, 2017 and is available for streaming. His second album, Between Strings: Music for Solo Guitar and String Quartet, will be released in July, 2018. Visit www.tyeaustin.com for more information.

What is NYC Chamber Music Social?

NYC Chamber Music Social aims to connect creative and performing artists with industry professionals and sponsors over chamber music concerts at casual venues in NYC. These events are held monthly and generally start with drinks and networking from 7:30-8pm, a chamber music performance from 8-9pm, then more drinks and networking from 9-9:30pm. All proceeds go to the featured musicians at each event. All musicians, industry professionals, and music lovers are invited to attend. Feel free to invite your friends and bring your own beverages. Ages 21+

You can make tax-deductible with a 501(c)(3) status through our fiscal sponsor, Fractured Atlas. Your donations go towards producing free public concerts in NYC, commissioning new works from composers, hiring NYC-based string quartets and orchestras, recording albums, organizing music workshops in schools and summer camps, and much more.

Anybody is also welcome to host a NYC Chamber Music Social in their living room, rooftop terrace, local cafe, office space, library, or any other non-conventional concert venue. Please fill out the form below or email info@tyeaustin.com if you’d like to donate or host any of the following acts: